Funding available for public infrastructure projects including green space offers an exceptional opportunity to promote economic vitality, environmental quality and equal justice for all, including low income communities and communities of color. These communities disproportionately suffer from disparities in access to green space, including parks and school fields, and related human health problems that stem in part from the lack of places for physical activity and recreation. People of color and low income communities must receive their fair share of public investments in infrastructure projects including green space. Solutions to many social problems – unemployment, environmental degradation, no place to play, little hope for disadvantaged youth, obesity, rebuilding the nation’s infrastructure for generations to come – must be tied to a vision for a new America that includes stimulus projects to improve the lives of all residents.

National parks support more than $30 billion in spending and more than a quarter million private-sector jobs each year in rural and urban communities that are gateways to the parks. Each dollar invested in park operations generates about $10 for local communities, and every two NPS jobs generate one job outside the park.

Secretary of the Interior Sally Jewell and  Los Angeles Mayor Eric Garcetti with the children of the Anahuak Youth Sports Assocation and The City Project at the Los Angeles State Historic Park announced a new initiative to connect local youth with urban wildlife refuges in Los Angeles, one of 8 such pilot projects in the nation. “For the health of our economy and our public lands, it’s critical that we work now to establish meaningful and deep connections between young people – from every background and every community – and the great outdoors,” said Secretary Jewell. “There’s no doubt that these goals are ambitious. That’s why we’re going to work with schools, private and non-profit partners and communities to leverage resources to help turn this vision into a reality.” A 21st Century Civilian Conservation Corps should provide meaningful work, strengthen the economy, build people’s feelings of confidence and self-worth, and develop stewards for environmental justice.

“Numerous studies have shown that recreational spaces increase property value and increase revenues for local businesses,” according to Representative Judy Chu in her support for a new national recreation area in the San Gabriels.

According to a survey of California state parks by Sacramento State University, visitors to California’s state parks spend an average of $4.32 billion per year in park-related expenditures, based on attendance estimates of about 74.9 million visitors a year. The survey, commissioned and funded by the California Parks and Recreation Department and conducted by the University’s Department of Recreation, Parks and Tourism Administration, found that park visitors spend an average of $57.63 per visit, including $24.63 inside state parks and $33 outside. The survey covered 9,700 visitors at 26 state parks representing the diversity of the park system’s 280 parks. The survey was taken from fall 2007 to February 2009. Of the visitors surveyed, 11.95 percent were non-residents of California, and their average spending per person was $184.91. Based on the calculated $4.32 billion in park-related visitor expenditures per year, $1.66 billion is generated by non-residents of California.

The Civilian Conservation Corps offers valuable lessons for national parks today to get the nation back to work in the worst economic crisis since the Great Depression. The CCC was one of the most successful New Deal programs and appealed to people across the political spectrum and class lines. CCC employed 3 million young men, planted 2 billion trees, slowed soil erosion on 40 million acres of farmland, and developed 800 new state parks. Visits to National Parks increased 600% from 1933 to 1941. Unemployed youth got paid, and their minds and bodies grew stronger, they contributed to society and stayed out of trouble as they learned the benefits of hard work, conservation and recreation. Businesses sold goods and services to CCC camps. This is just as important in terms of lessons learned: the CCC employed almost only white men — not women and not young boys and men of color. 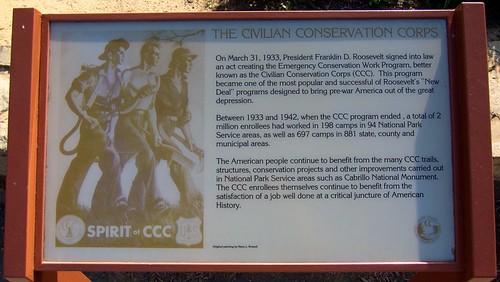 Meaningful work includes fair and effective funding for social justice and environmental justice advocates. A recent evidence-based study by the former head of the Environmental Grantmakers Association highlights the strategic need for the mainstream environmental movement to explicitly address race and poverty as part of the problem and part of the solution. The report recommends that environmental funders support a robust grassroots infrastructure — and support equal justice. The report emphasizes that “any push for environmental change that fails to prioritize communities of color is a losing strategy.” “Until the broader concerns . . . of all communities are on the radar of environmentalists, it will be hard for environmentalists to be on the radar of all communities.” According to the report, the more committed to the environment a foundation is, the less likely it is to support social justice. From 2007-2009, only 15% of environmental grant dollars were classified as benefiting marginalized communities, and only 11% were classified as advancing “social justice” strategies, a proxy for policy advocacy and community organizing that works toward structural change on behalf of those who are the least well off politically, economically and socially. Grant dollars donated by funders who committed more than 25% of their total dollars to the environment were three times less likely to be classified as benefiting marginalized groups than the grant dollars given by environmental funders in general. In short, environmental funders are expending tremendous resources, yet spending far too little on high- impact, cost-effective grassroots organizing. The report recommends that foundations contribute 20% of their environmental giving to groups working with poor communities and 25% to advocacy and organizing.

Park and infrastructure projects must include funding for diverse contractors, including small, minority, women, and veteran owned enterprises.

NPS features Transit to Trails as a national best practice to address for taking inner city youth and their families and friends on fun, educational, and healthy park, river, beach, and mountain trips. “As demonstrated by The City Project’s work in Los Angeles, many families in the low income neighborhoods of the region often do not have cars nor are near public transportation systems that allow for access to regional parks.” Transit to Trails provides more opportunities for inner city residents to learn about water, land, wildlife, and cultural history, and engage in physical activity through recreational opportunities. It also helps reduce traffic congestion and parking problems, improve air quality, and reduce polluted water run-off into rivers and the ocean by providing accessible public transportation.

Annual attendance at national parks through July 2012 totaled 201 million, up 1.5% from last year. Cuts could result in lower visitation rates and hurt efforts to diversify park access. According to an NPS survey released in 2011, 78% of visitors to national parks were non-Hispanic white in 2008-09, 9% Latino, 7% African American, 3% Asian and 1% Native American. Visitation differences had not changed much since the previous survey in 2000.

Transit to Trails is the best community outreach to engage youth and other residents, take people to the parks now, lead to meaningful work, and provide stewards for environmental justice for generations to come.

Displacement and gentrification are significant issues that have not been adequately addressed in creating green space to improve communities. It is necessary to ensure that low-income people, renters, and small businesses are not displaced as property values increase with green access. Current renters must be made into buyers. Otherwise the people for whom green space is created in parks and schools will not be able to live close enough to receive their fair share of the benefits. The same is true for small businesses. Traditionally the culture of Los Angeles, for example, has treated the L.A. River as an industrial waste land with low rents for homes and small businesses along the River. Developers are distributing glossy brochures urging commercial buyers to snatch up land along the River. It’s a land grab. The same is true for the neighborhoods where schools have been built or modernized. This is a prime area to implement practical real world solutions to keep revitalized communities affordable for all.

In many cities, the cost of housing is rising out of the reach of the middle class as well as low income people including the working poor. Los Angeles is the most expensive city in the nation for renters. Seven of the top 10, and nine of the 20, cities in the nation where rents are highest relative to median gross income are in California, including Los Angeles, Santa Cruz, San Diego, San Francisco, Salinas, San Luis Obispo, Santa Rosa, Napa, and Santa Barbara, according to a Harvard study. In December 2013, Housing Secretary Shaun Donovan declared this “the worst rental affordability crisis that this country has ever known.” Nationally, half of all renters are now spending more than 30 percent of their income on housing, according to a 2014 study, up from 38 percent of renters in 2000. For rent and utilities to be considered affordable, they are supposed to take up no more than 30 percent of a household’s income. That goal is increasingly unattainable for middle- and low-income families as a tightening market pushes up rents ever faster, outrunning modest rises in pay, and unemployment levels remain high, especially for people of color.

Multibenefit projects including parks, schools, water, and other infrastructure work can help distribute economic benefits fairly for all. Programs and policies must be in place to avoid displacement and gentrification.