Transit to Trails takes inner city youth and their families and friends on fun, educational, and healthy trips to parks, rivers, mountains, and beaches.

Every agency or group that has spoken on the issue has endorsed Transit to Trails as a best practice to get people to parks now. Support for such transit programs comes from:

According to NPS, “Transit to Trails provides more opportunities for area youth and their families to learn about water, land, wildlife, cultural history, and engage in physical activity through recreational opportunities. It also helps reduce traffic congestion and parking problems, improve air quality, and reduce run-off of polluted water into rivers and the ocean by providing a more accessible, public transportation.” NPS San Gabriels Study, page 179.

“As demonstrated in The City Project’s work in Los Angeles, many families in the low income neighborhoods of the region often do not have cars nor are near public transportation systems that allow for access to regional parks.” NPS San Gabriels Study, page 93.

Similarly, NPS writes: “Few, if any sites, within the [Santa Monica Mountains National Recreation Area] SMMNRA and the Angeles National Forest can be accessed by public transportation, a major barrier for urban residents without a car.” NPS ROTV Study, page 128.

President Obama’s Every Kid in a Park initiative provides all fourth-graders and their families free admission to national parks, and includes transportation grants for schools in the most underserved communities.

The California Parks Forward Commission’s final report states Transit to Trails is a “proven transit program that should be considered for adoption in state parks.” Parks Forward Final Report, pages 32-34.

The USACE emphasizes the need for transit to reach green space in its study to revitalize the Los Angeles River. “According to Southern California Association of Governments (SCAG), public parks are intended to serve all residents, but not all neighborhoods and people have equal access to these public resources. SCAG calls for a multiagency effort and public transportation to improve access for all to parks throughout Southern California (SCAG 2008).” USACE LA River Study, chapter 3, page 61.

Transit to Trails is a proven program that engages urban youth and their families, can lead to meaningful work in park and environmental careers, and develops tomorrow’s stewards for generations to come. We encourage other park agencies to provide resources, buses, rangers, and interpretive programs for Transit to Trails.

SCAG Equal Access to Parks and Transit to Trails

In response to public comments by The City Project and others calling for healthy parks, schools, and communties, SCAG conducted additional and new analysis on access to parks. “Public parks serve all residents. . . . However, not all neighborhoods and people have equal access to these public resources,” including local, state, and national parks. The following map shows the unequal distribution of parks and low income neighborhoods in the Southern California counties of Los Angeles, Ventura, San Bernardino, Riverside, Imperial, and San Diego. 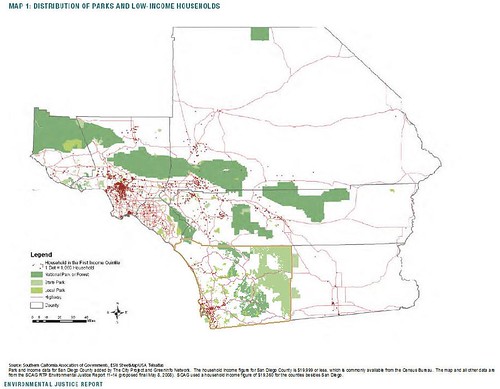 “Research has found a complete lack of public transportation services into National Parks, but this also appears true for State Parks. There is almost no access to national parks and very limited access to state parks by transit across all income groups . . . .” SCAG cites the policy report above, prepared by USC students for The City Project.

“All income groups for the whole region will have greater park accessibility due to the infrastructure investments proposed in the 2008 RTP. However, a multi-agency effort must be undertaken in order to further address and remedy the issue of inequity of park access.” (Emphasis added.) One remedy is Transit to Trails. Source: SCAG RTP Environmental Justice Report, pages 11-14, 24.